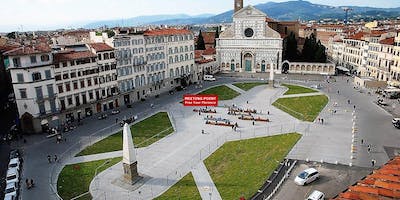 Florence is one of the most beautiful and visited cities in the world and joining our tours will give you the chance to enjoy more the beauty of its monuments and of its treasures, through the knowledge of the families who made it great during the Renaissance, such as the Medici. Our guides will show you the hidden gems of the city and they will tell you about the anecdotes that only those who live here know. If you join our tours, our guides will also give you pieces of advice about authentic restaurants and shops and of course about how to avoid tourist traps. Along the way we will also stop at some authentic local shops that will offer you small bites of typical Florentine food. Don't miss the chance to visit Florence with the eyes of a local. Our walking tour Part 2 starts at piazza S. Maria Novella; the tour will be in English.  After a short introduction we will talk about the history of Florence in front of the church of S.Maria Novella, and then we will reach the Basilica di San Lorenzo, one of the oldest and most important churches of the city where also Brunelleschi and Michelangelo had worked.

In the background of the Basilica you can admire the dome of the Cappella dei Principi, erected at the end of the 16th-century to host the Medici’s crypt.  Then we will reach Palazzo Medici Riccardi that is considered the place where Renaissance took place. This building has been the first place where the Medici family lived (Cosimo il Vecchio, Lorenzo il Magnifico…) and where artists such as Donatello, Michelangelo, Paolo Uccello, Benozzo Gozzoli and Botticelli have worked.  After this we will go to Piazza del Duomo, the heart of Florence, dominated by the Cattedrale di Santa Maria del Fiore, Giotto’s Campanile and the Battistero of San Giovanni.  Through Via del Proconsolo, we will reach Piazza San Firenze and we will stop in front of the Museo del Bargello, one of the main museums of the city (and of the world. ) where you will find pieces of art made by artists such as Donatello, Ghiberti, Cellini, Giambologna and many other important sculptors.  We will walk through via dei Leoni and via dei Neri, where we will stop in two little local shops for small bites of typical florentine food.  The tour will move toward the Arno river where our guides will tell you something about the Ponte Vecchio, the Corridoio Vasariano and the Uffizi museum, that are, together with the beautiful Piazza della Signoria, (Palazzo Vecchio , Loggia dei Lanzi ) at 5 minutes walking from the end of the tour. The tour will finish in front of the Museo Galileo in a place from where you will be able to admire the amazing Basilica di S. Miniato.  S.Maria Novella > Cappelle Medicee > Basilica di San Lorenzo > Palazzo Medici Riccardi > Duomo > Cathedral > Battistero > Campanile di Giotto > via del Proconsolo > Piazza S. Firenze > via dei Leoni > via dei Neri (taste of typical food)  > Museo Galileo (Uffizi, Ponte Vecchio, Basilica di S. Miniato).  Lenght: 2,5 hours.